By now you’ve probably seen and heard the protests surrounding the Sochi Olympics regarding the Russian anti-gay laws. In steps the XXL Airport Love commercial which will have you smiling for a while. XXL is a sports and outdoor brand by the way, which markets to Norway, Sweden and Finland.

First we see a classic American car rolling into the airport. A woman steps out, walking through the airport. Meanwhile several sporty guys are doing their moves. After the woman clears the customs, she walks onto the tarmac towards a plane. The men meanwhile keep gazing at her, with one being slapped by his wife at the beginning of the commercial. 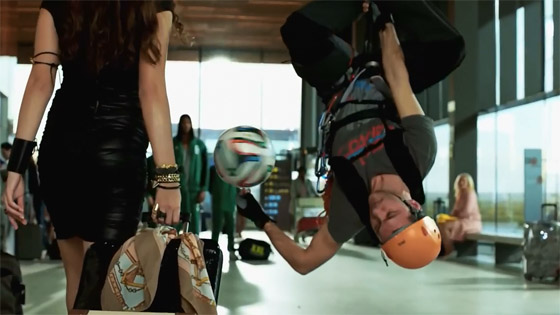 To their surprise however…well you should watch the video.

I like the setting and the way the story unfolds, involving many sports men.

A quote regarding the XXL Airport love commercial:

“The films message is that sport is for everyone, no matter what team you play for. The film premiered at the same time as the opening ceremony of the Olympic Games in Sochi. ”

All in all, it’s a cool commercial. I’d like to see more companies have the guts and humour to produce video commercials like this XXL Airport love commercial.