Volkswagen is ‘working on it’ as they say: they’re next in the Super Bowl teasers list. The Volkswagen Super Bowl commercial teaser involves a scientific(looking) approach, dubbed ‘Algorithm’. The ‘scientist’ (German accent involved, of course) notes that they’ve taken apart all of the succesful humor ads and put all of their elements in one single ad. It’s safe to say not all goes as planned…

On the whiteboard behind the scientist a woman is seen scribbling, where things like twerking?, puppies, groin hits and celebrities are put in their separate squares. 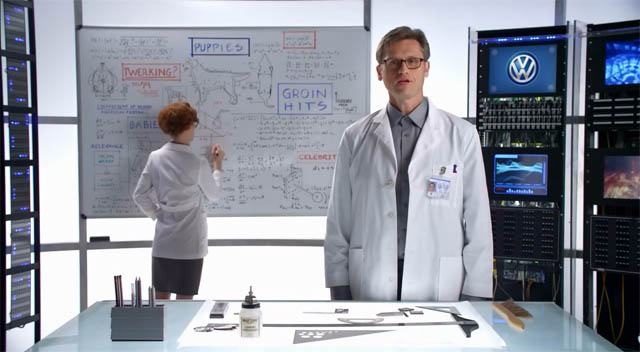 A tv is rolled in view by the woman, showing a Volkswagen car in the center with many ‘fun’ elements around it. First up is Carmen Electra, but we also see the aforementioned puppies, as well as babies, a cow, Abraham Lincoln and much more.

In the campaign, they are promoting the fact that they have more cars with over 100k miles on the road than any other brand.