Nike The Runner – Find your greatness

This campaign ad by Nike The Runner, also called ‘Find your greatness’ was launched during the 2012 London Olympics. cheap mlb jerseys The boy in the ad is Nathan wholesale nfl jerseys Sorrell and seen running down a road, advancing towards the camera which is looking back to him.

The ad saw mixed response when launched. Some people believed Nike was using Nathan wholesale nba jerseys in the HACK3D ad to show people who are overweight do sports too. Others said they were ‘using’ him to get some goodwill with the audience, instead of using athletic people in the ad.

Nevertheless, the message is a good one: regardless of one’s actual physical condition, doing exercise is good for all. In this case, finding one’s greatness troballa in whatever you do.

A related video ad is the one below:

This one shows sports people from many アーティストにお勧めのホームページ作成法 ‘Londons’ all over the world. The above one was posted a week cheap nba jerseys before the one with the boy, and gained three times the viewing audience, nearly 6 million views.

The full text of the ‘find your greatness’ video’s is feat. posted below: 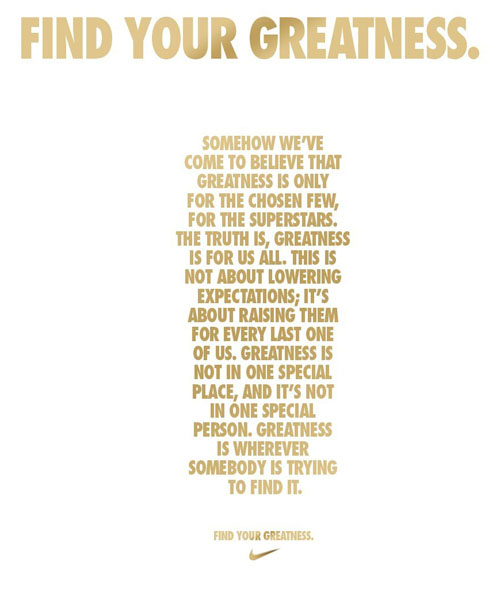 All in cheap nba jerseys all, Nike has done its share (for a bit) to kill the stereotype only athletic Возвращайте people would excercise. Regardless of physique and fitness, everyone can do it.