The Budweiser Super Bowl commercial this year involves puppies and horses. We posted the Bud Light preview with Arnold Schwarzenegger before, but this is in a bit different style.

Here we see the friendship between a dog and a horse. The puppy comes running and crawling in from a puppy adoption farm to meet up with the horse. To the puppy’s chagrin, he’s brought back to his female owner after being discovered by the farmer.

This happens a few more times until the puppy is adopted. But when he’s taken away, his horse friend runs along and block the car with the adopted pup. In the end, the pup is escorted home by the horses. We find the horse and pup enjoying time together. So do both the woman owner of the puppy adoption center and the farmer, presumably while enjoying a Budweiser beer: 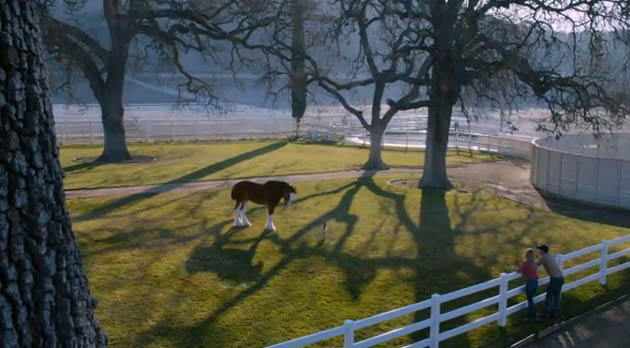 This Budweiser Super Bowl commercial hasn’t much to do with beer, but still: it’s a nice ad. Already viewed nearly 40 million times, it’s one of the best appreciated ads so far from the Super Bowl. More coming up later on in this category. Super Bowl XLVIII may be done, but we still have lots of ads to discuss.